The table of contents in our family cookbook has two listings for Chocolate Chip Cookies, both on page 92. At first glance one might think this is a typo, but let me assure you, it is not. I’d even go as far as to say it’s the exact opposite of a mistake because it confirms just how much we Hahns love cookies.

Spoiler alert: it's a lot. 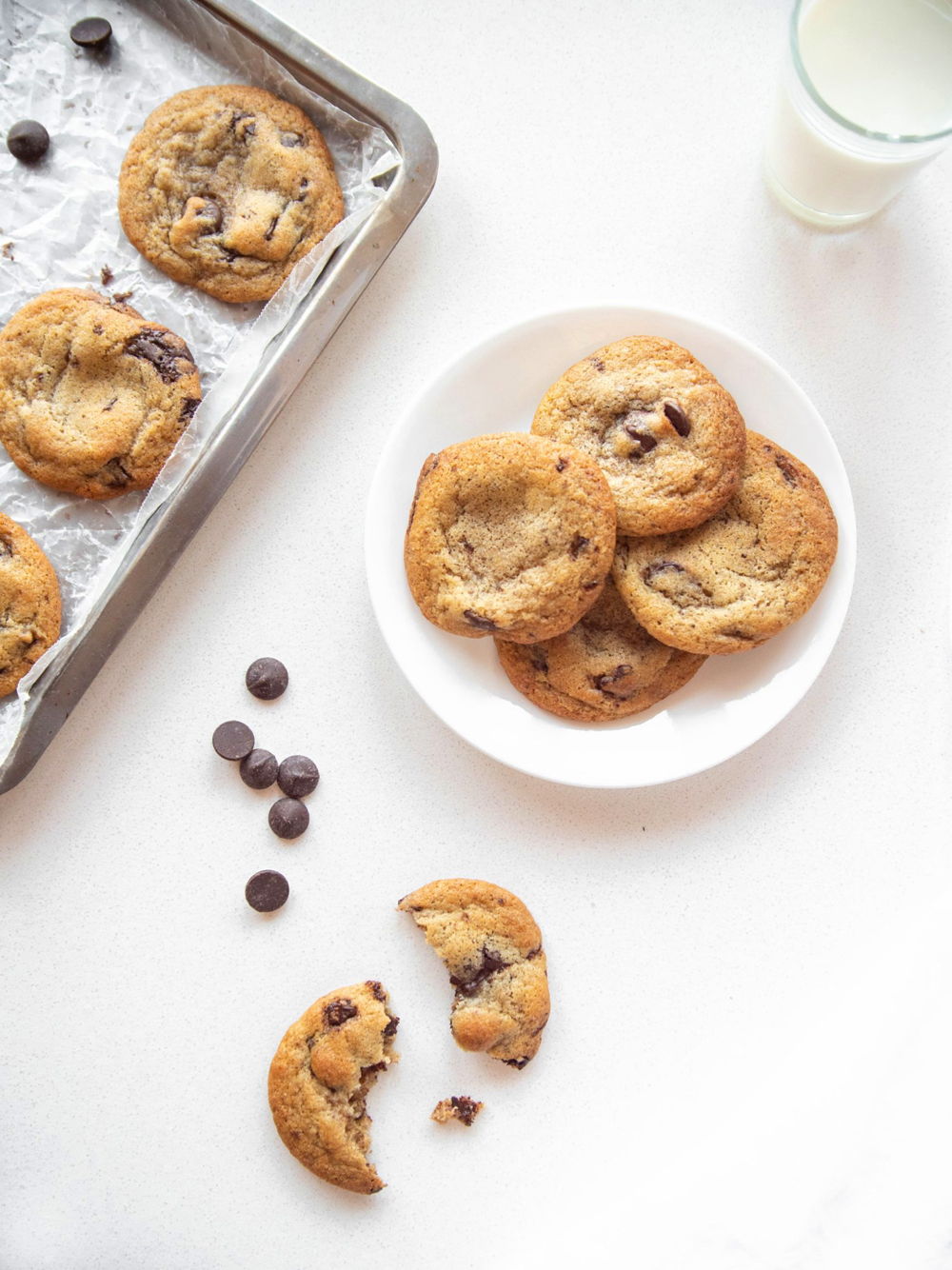 Not to say we’re alone in this romance. It’s undeniable that cookies are a classic confection that is loved the world round. Then if we get more specific with Chocolate Chip cookies? Whew, game over. Ask Google for a Chocolate Chip Cookie recipe and within 1.10 seconds you’ll have “about 92,300,000 results” to choose from. After a little noodling through those initial results I confirmed my hunch that this first one in our cookbook, titled ‘Original Chocolate Chip Cookie,’ is in fact the recipe found on every bag of Nestle Toll House Chocolate Chips. Although I’m realizing that Nestle definitely wears fancy pants because their product is actually called ‘Semi-Sweet Chocolate Morsels.’

Funny, that didn’t seem to catch on.

Also, let’s be Hahnest… No one in their right mind would ever just order ONE of these cookies, whatever they might be named. And because sharing is caring, I especially recommend practicing this philosophy if the person you’re sharing with is your future self. 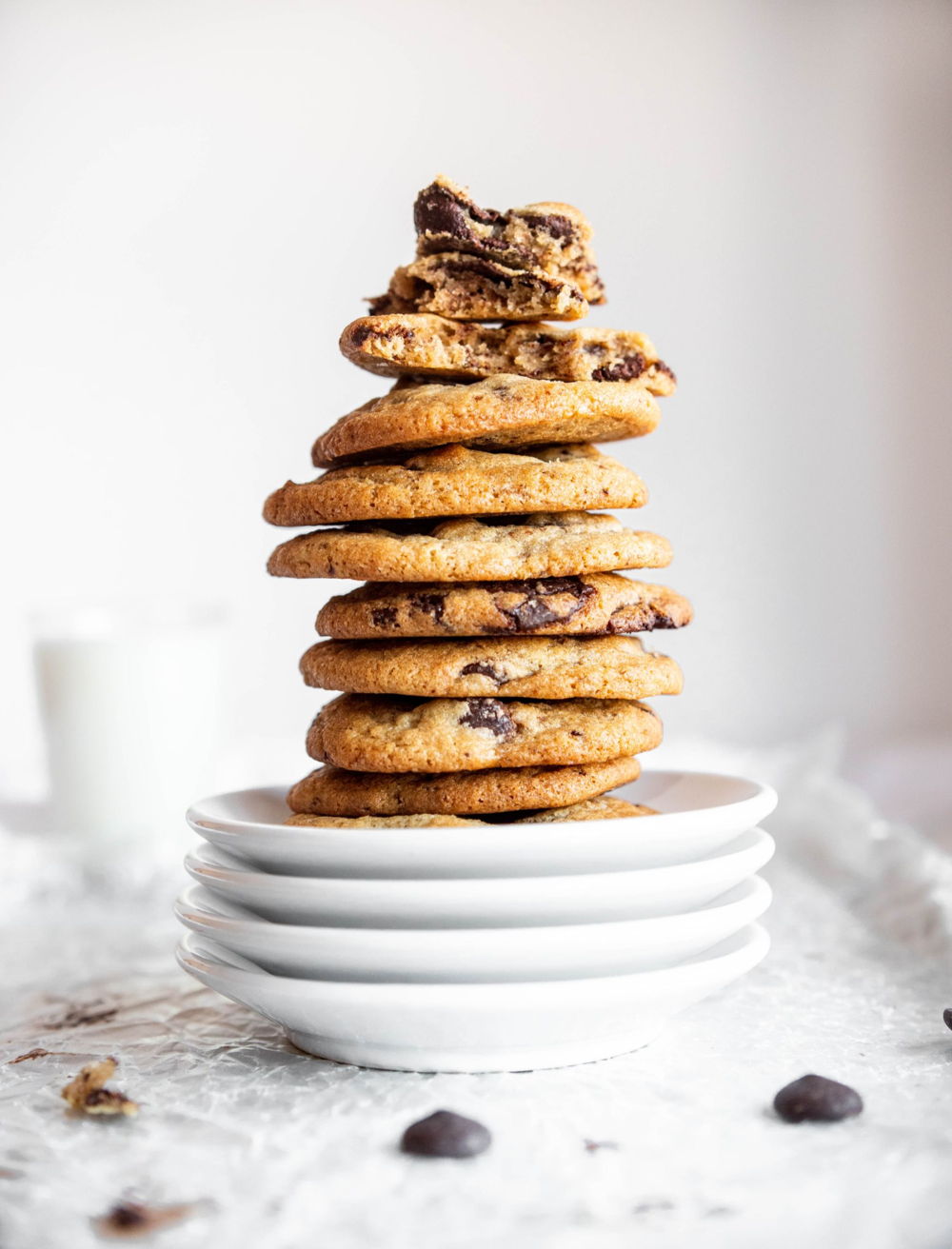 “Oh, excuse me. Apologies. When I asked for one cookie a moment ago I really meant one cookie for now, one for later, and one for tomorrow. K, thanks!”

But this is a post about baking your own cookies, so no need to concern yourself with overpriced bakeries when you’re soon to have one dozen Semi-Sweet Chocolate Morsel cookies at your disposal.

To all my experienced bakers out there who might be asking themselves, ‘Wait. Only a dozen? Doesn’t the classic choc chip cookie recipe usually make way more than that?’ – to which I say, yes. Yes, it definitely does. But I’m not accounting for how many must be immediately consumed fresh from the oven because who needs to keep track of that in the recipe yield? I’m pretty confident that the super-warm-and-ooey-gooey-but-with-a-slight-crunch-on-the-edge variety has less impact on your digestion, so better get ‘em while they’re hot!

But don’t take my word for it, feel free to do a little data gathering research yourself and let me know if you agree.

They do say that baking is a science, after all.

And while I can’t speak for my brothers, it was a science that I never felt intimidated to experiment with as a kid. 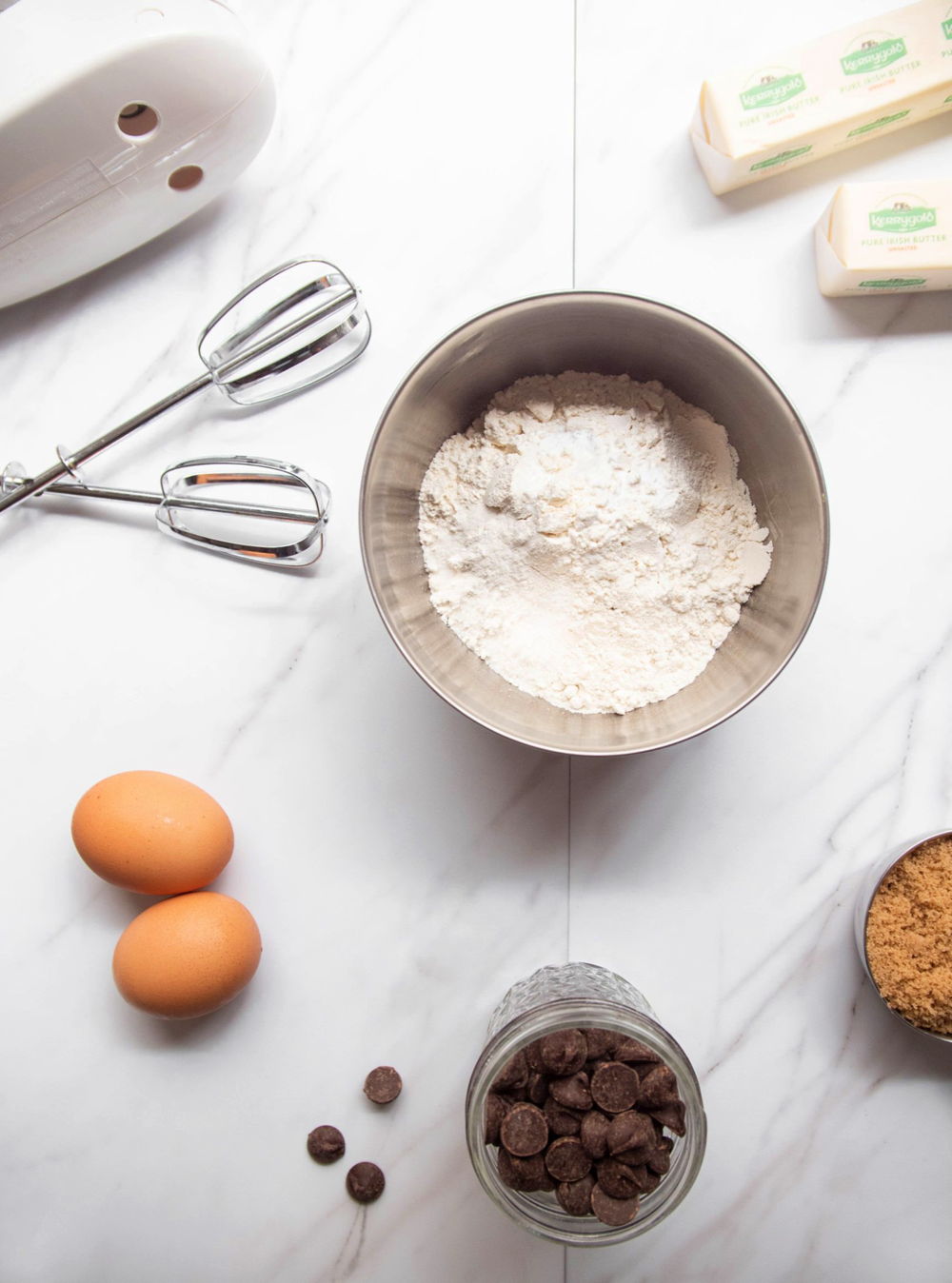 This fail proof recipe was in regular rotation in our childhood home. The only matter in question was who was going to make the next batch. Which is why I’m pretty confident that one of the first recipes I ever ventured to execute on my own was for chocolate chip cookies. I have a clear recollection of the excitement garnered by unwrapping those two whole sticks of butter (or in the early days, margarine) and plopping them into the bowl to soften. And that excitement is probably what helped retain these early memories. It’s said that when experiences are paired with a strong emotion our brains tend to convert them into memories that are, more often than not, stored in the ‘keep’ pile.

Which explains why I also remember the frustration of digging in the utensil drawer for the two metal beaters that plugged into our hand mixer. Those spindles on the end were always getting tangled in other gadgets and required extra effort to wrestle free. Annoying, but it was well worth the trouble because the hand mixer always saved your arms from what could seem like endless stirring. Especially when you got to the part when the butter is supposed to combine with your sugar and eggs… I admit this step is much easier if you actually allow time for the butter to soften, but when cookies are the end goal, that whole waiting for ANYTHING concept is nearly impossible. 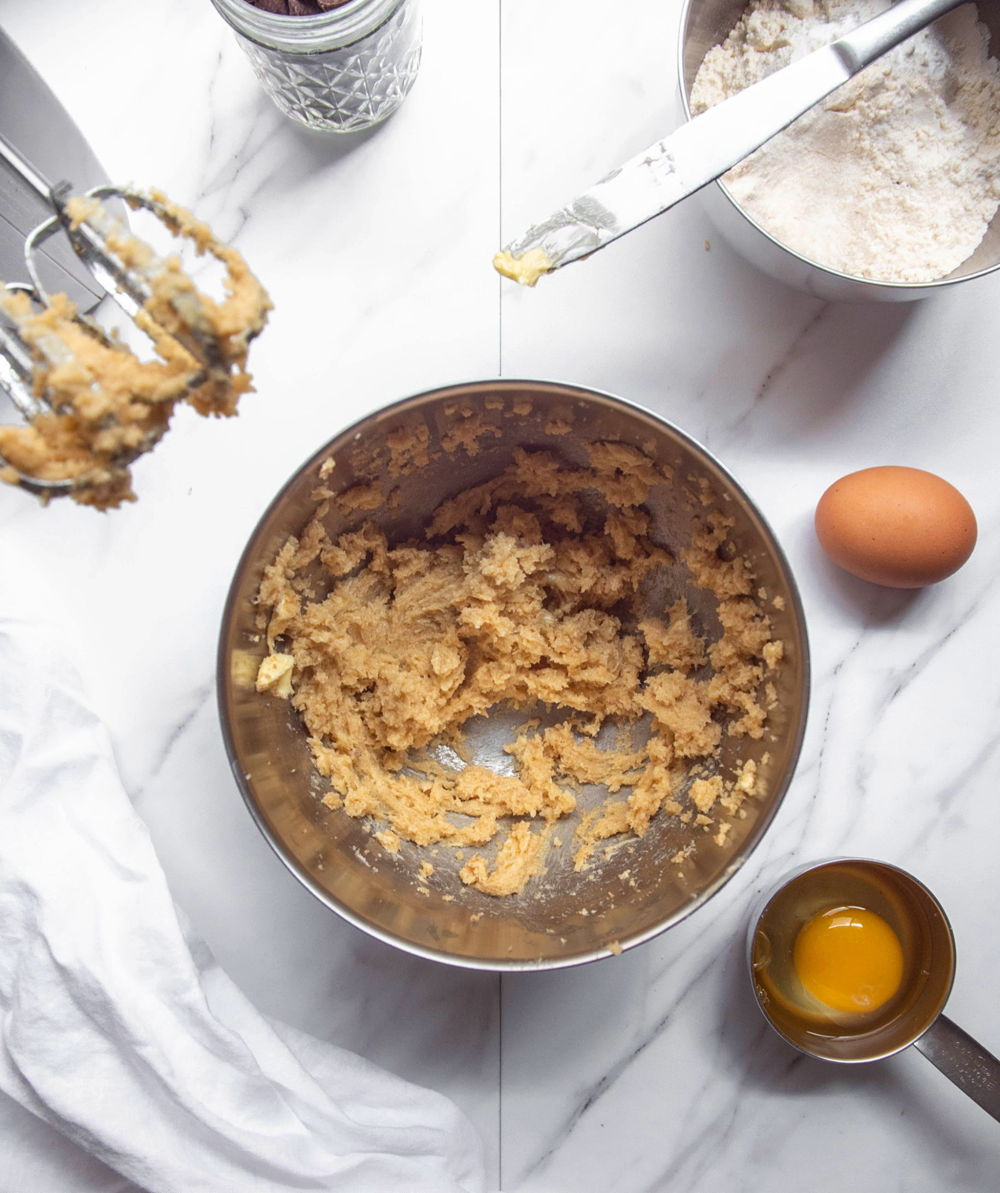 I also always thought this step was the weirdest looking part of the process. But as strange as it appeared while stirring, I enjoyed seeing the way the bits of butter formed tiny islands in the sea of egg whites and brown sugar before submitting to the power of the mixer (insert Tim Taylor “more power” grunt here). The moment when the butter islands finally relent and merge into the other ingredients and become a creamy batter, on the very brink of becoming cookie dough, is beyond satisfying. Not to mention delicious.

Our mom was always very encouraging whenever we showed interest in helping in the kitchen. In hindsight, I’ve realized that she was also quite skilled at striking a graceful balance between staying close enough to help if we had any questions, but still engaged enough in her own projects in a way that fostered a sense of independence while we poured, measured, and stirred our way through learning to bake. 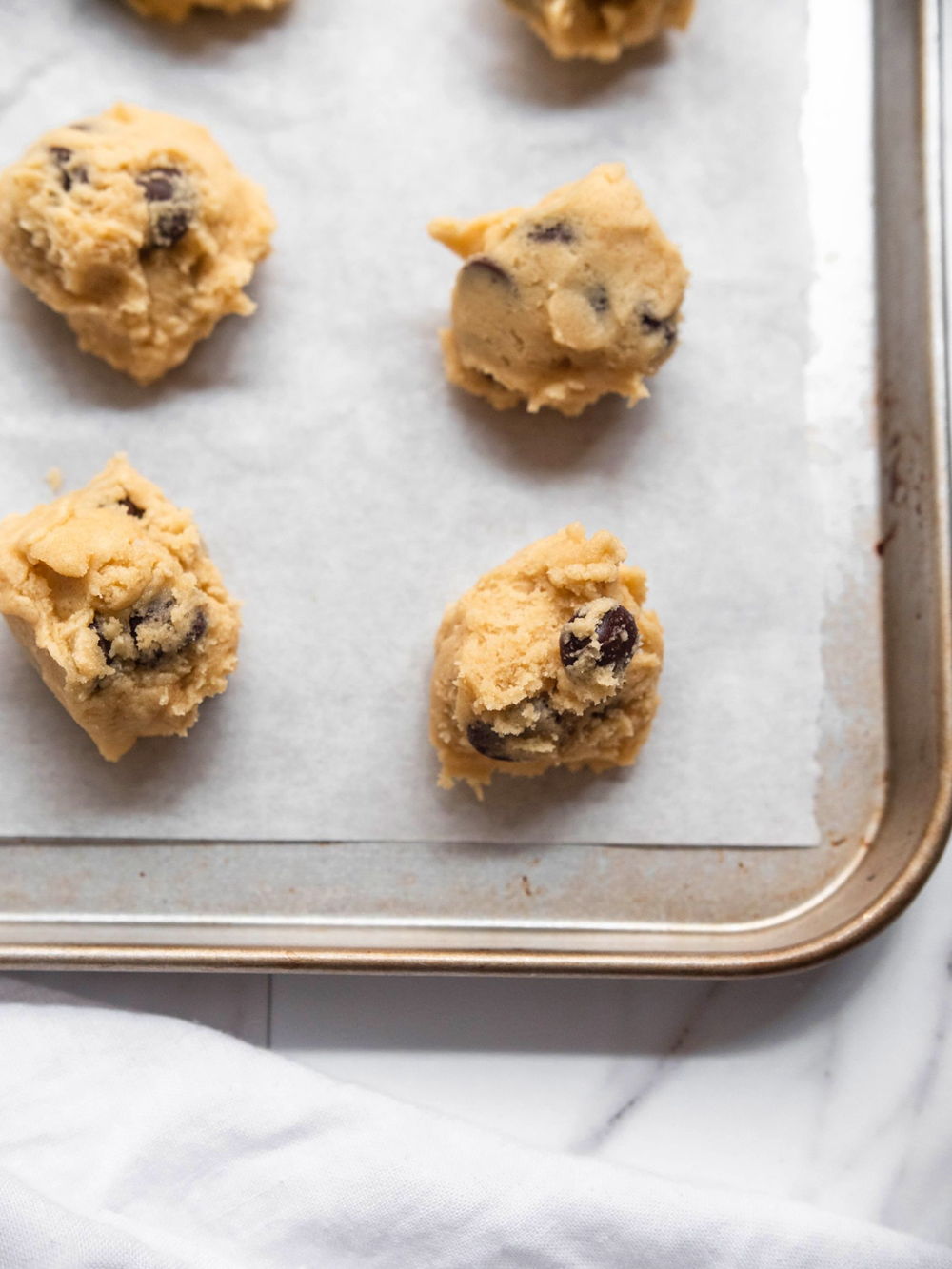 While honing our kitchen skills we usually stuck to whatever the recipe directed. But that didn't mean we weren't open to making adjustments after some initial trial and error. So although not reflected in the printed cookbook, I’ve confirmed with my bros that we did consistently change one aspect of the Nestle Toll House recipe. We used fewer chips.

Hang on; don’t jump ship (chip?) just yet. And please don’t mistake this to mean that we dislike chocolate, because that would only ever be true on Opposite Day. But in this instance we felt that using less chips allowed the magic of what makes chocolate chip cookies so universally adored to be more prominent. Can you guess? Say it with me now: 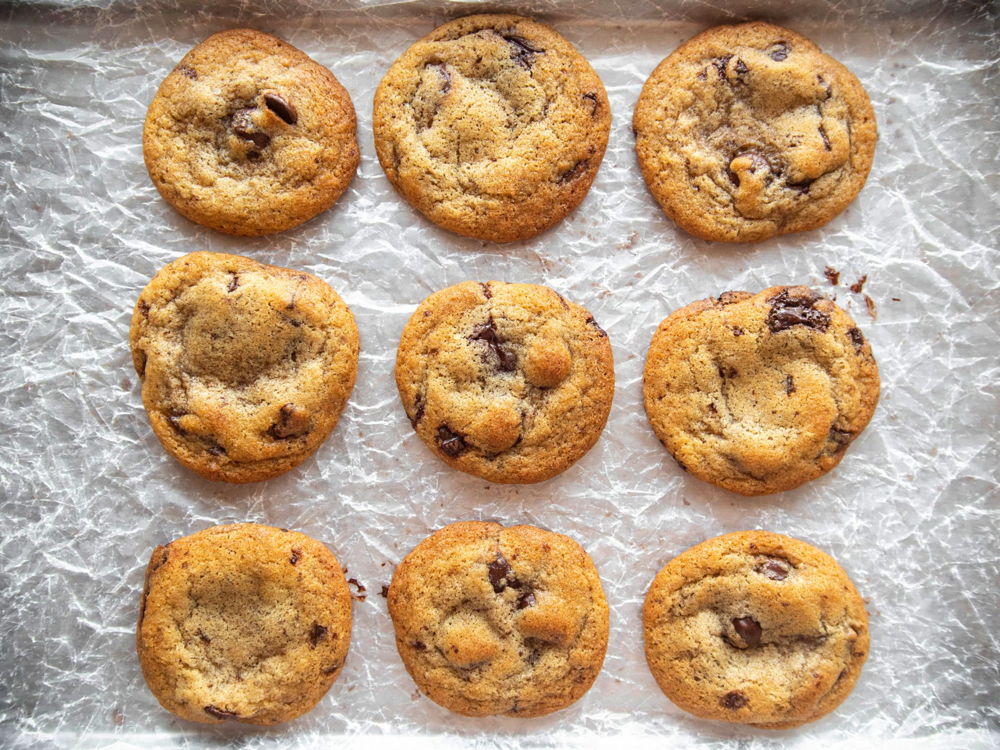 So while our cookbook’s version still matches the 2 cups of chips called for on the Toll House bag, I’m certain that the Hahn household determined only 1 cup of chips were required to achieve cookie perfection. I suppose if you did add the optional 1 cup of nuts that they suggest then the ratio of dough-to-chips-to-nuts might be more balanced. But in our Hahnest opinion, 2 cups of chips was 2 many. ☺ Plus, we never add the nuts anyway.

Where we DID conduct more experimentation with this classic recipe was in the realm of dough temperature and bake time. Pro tip: always aim to under bake your dough if you want to avoid The Wrath of The Siblings. Wrath akin to when it’s your week for dishes and someone finds a fork that is less than “clean” in the utensil drawer. If you haven’t experienced that one, trust me, it’s brutal. To avoid said wrath (or just overly crunchy cookies), take the cookies out when they’re slightly browned and still very soft to the touch. They will still seem somewhat doughy, but have no fear because they’ll continue to bake a little more on the hot pan, even once removed from the oven. 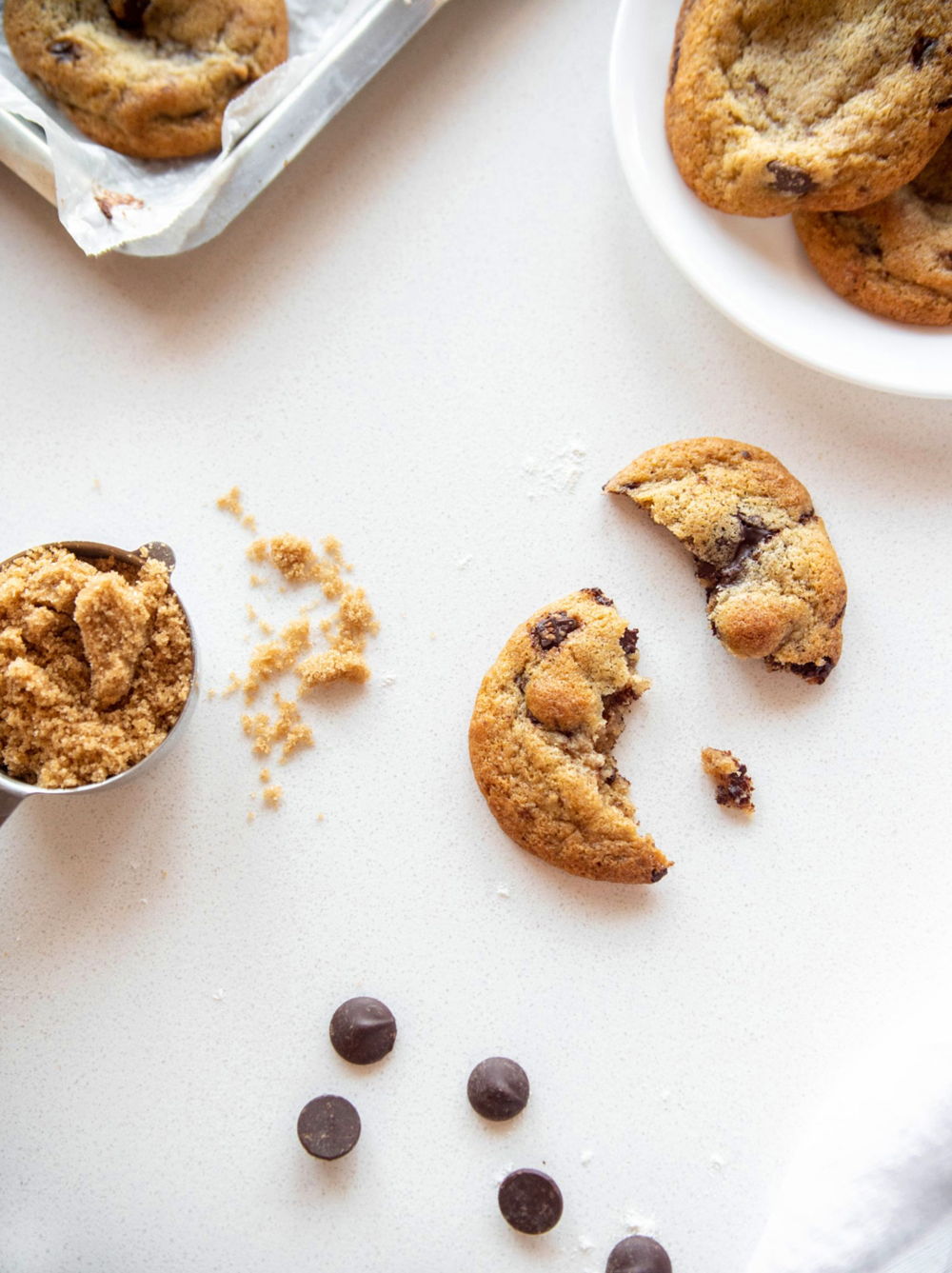 Morsel of the story: under baked = perfection.

Regarding the temperature of the dough itself, we learned that the best cookie texture is achieved from a dough that has first been refrigerated for several hours, if not overnight. Since none of us ever had the restraint to wait that long to bake the first batch, it was accepted that the first round of cookies would be thinner and crunchier, and that this was due to the warmth of the butter and therefore deemed no fault of the baker. But don’t you be messing up that dough once it’s been cooled… unless you want to find yourself with two straight weeks of dish duty instead of one. Unlike a popular chewing gum brand might suggest, it's not double the fun.

But instead of dwelling on “K.P.” (our dad’s repeatedly chanted reminder of choice whenever the TV was on but the dishes weren’t yet clean) how about we switch from Kitchen Patrol to another acronym I like to call CCCR? And no, it’s not a typo referring to Creedence Clearwater Revival. I’m talking about Chocolate Chip Cookie Recipe time!

Combine: flour, baking soda and salt in a small bowl. Beat butter, granulated sugar, brown sugar and vanilla in large mixing bowl. Add eggs one at a time, beating well after each addition; gradually beat in flour mixture. Stir in morsels and nuts. Drop by rounded tablespoons onto ungreased sheets. Bake in preheated 375 F oven for 9 to 11 minutes or until golden brown.

And for anyone who is wondering about that other cookie recipe on page 92, it’s called ‘Comfort Chocolate Chip Cookie’ and you bet your bonnet we’ll be blogging about it in the near future.

Because we hear that cookie comparisons will bake anyone’s day! And we like to chip in whenever we can.