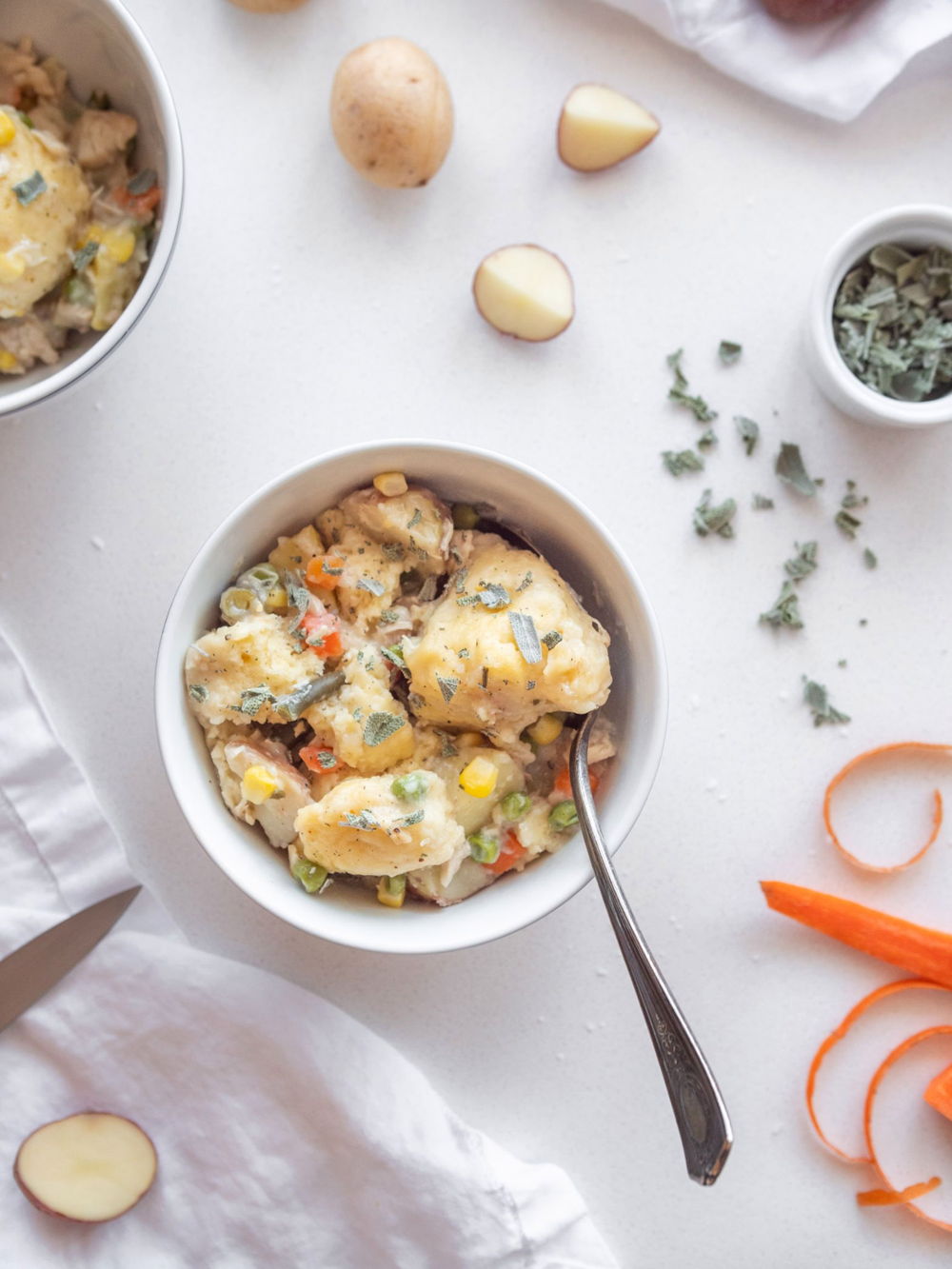 I cannot remember a time in my life where I didn’t know about chicken and dumplings. Like oxygen and sunshine, it simply was. There’s a bunch of elemental “always existed” food things in my life like this: bread, oatmeal, chocolate chip cookies, Frankenberry (just kidding, I vividly remember when the pink, sugary glory of Frank came into my life). But as I was getting ready to write this, I began the way I like to start all of these pieces: trying to remember the first time I had the particular dish. Recalling my first impressions seems to help with setting a path for what I find most interesting about a particular recipe or food. It’s a variation on “go with your gut,” all punning intended, but pulling on that thread of initial interest certainly makes the whole sweater easier to unravel. However, in the case of chicken and dumplings, my first memory was a total blank. No matter how hard I tried, I couldn’t remember a time B.D. (“Before Dumplings”).

Tangential, but related: I know someone who didn’t try Fig Newtons until they were a teenager and, consequently (I think), sublime Figgy Newts became their new favorite snack. To have such a memorable experience of the first time trying something entirely unique, at an age where you’re still impressionable, but totally cognizant of their sui generis, is just totally awesome. (Which also goes a long way to explain way I still love Tom Waits after being introduced to his music at age 14 by my brother.) But, in this case, without that clear jumping off point, I switched my tack.

It occurred to me that, although chicken and dumplings is a stew-like connection, the individual components are all standouts. You can really taste the chicken, you can really experience the texture of the dumplings, the flavor the stew, the brightness of the peas and the sweetness of the carrots. In fact chicken and dumplings was what gave me my love of green peas. If ever I see a recipe, or a menu item, with peas involved, I will make, or order it in a heartbeat. In my opinion, peas stand apart from, and yet blend with, any dish they are used to create.

Without trying to be overly poetic, or attempting to evoke something you can’t conjure without having the actual experience, imagine if you will a warm, well-seasoned stew. (My line of thinking here is very “Goldilocks and the Three Bears.”) Thick, but not too thick. Salty, but not too salty. The perfect container for the other ingredients. Forget a “bread bowl” this stew is the “bowl” for the ingredients themselves.

Next up, the chicken. I’ve always loved slow cooked meats. I know this isn’t a universally shared preference, but if it’s falling off the bone, I just find it magical. The chicken here shouldn’t quite be that tender, but it is dang close. (It’s gotta stand up against being immersed in the stew, you don’t want it to just disintegrate into the liquid.) Then the veggies. And by veggies, I mean peas and carrots and you can add half an onion if you’re really up for some adventure. Again, the same advice applies, don’t let the veggies get too soft. Just tender enough. If they can hold their own against the rest of the stew, you will be rewarded for resisting the urge to overcook. Lastly, the dumplings. Think of a great biscuit. Then think of it dunked in gravy. Then think of it mixed with all of the above. Quite simply if you aren’t already raiding your pantry for ingredients to make this recipe, you’ve probably just eaten. 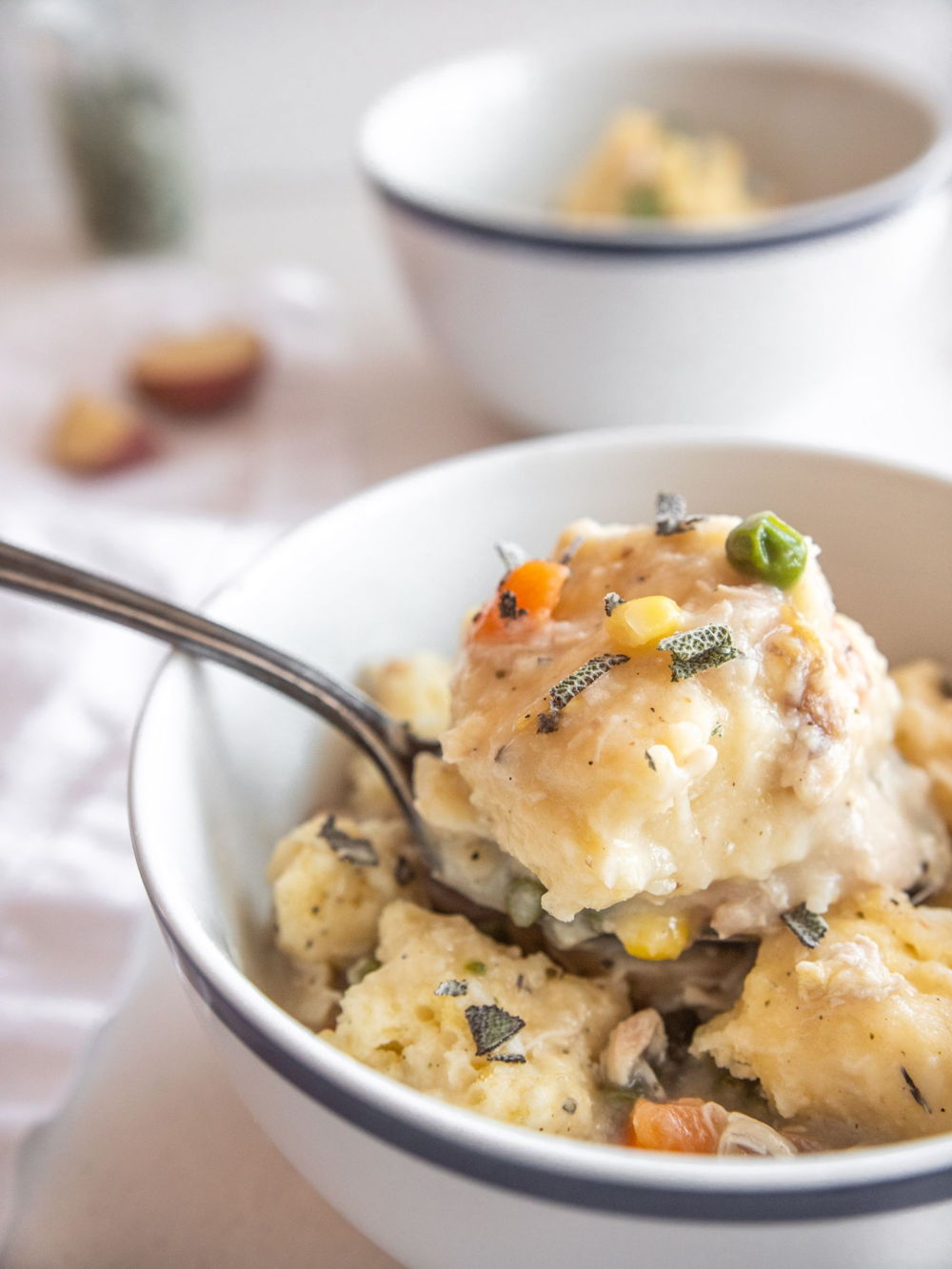 To make a long story, short, for me, chicken and dumplings is the “pizza” of stews; there’s never a time when it doesn’t sound good. You can pretty much eat it at any time and for any meal. It’s super easy to prepare and keeps well in the fridge. Plus you can dress it up with sides or have it as a meal in itself. No matter what way you go, I hope you like this recipe as much as I do!

One of the great things about this recipe is completely illustrated here. It is so easy. Which probably explains why it was such a staple for us as kids. It’s delicious and relatively low labor to make. Win/win! Basically you just combine the above ingredients in a large pot and simmer 2 to 3 hours on medium low heat until the chicken is tender. To test the chicken for doneness, simply poke it with a fork and see if it easily starts to tear away from the bones. Then remove from the heat and cool.

Once the chicken is cool enough to handle, place the meat on the cutting board and remove chicken from the bones, then and cut any large pieces of meat into smaller bits. Then, once that is complete, skim the fat from the broth and dispose of it. Then start to reheat the broth on medium heat. Once it has heated back up, but is not yet boiling, blend into the hot broth the following ingredients:

As you add the flour and water make sure you are stirring constantly as not to allow the flour to turn into clumps. Once the flour is fully combined with the water and broth, next add the following:

Stir until combined. Then as everything in the pot heats back up, shift gears to the dumplings and mix together all the below ingredients in a single medium bowl. Make sure you only mix until just combined and you have a nice, sticky textured dough. If you overmix the dumplings can become tough.

As soon as the dough is ready, take a spoon and drop the dumpling dough in individual, rounded spoonfuls into the hot soup. Then cover the pot tightly and bring to a boil gently until the dumplings are fluffy and dry, about 12 to 15 minutes. Then get out your best bowls and serve it up immediately. There’s nothing better than chicken and dumplings fresh from the stovetop! This makes about 4 to 6 servings, so scale the recipe accordingly for how many people you need to feed, or how much leftovers you want for the week! 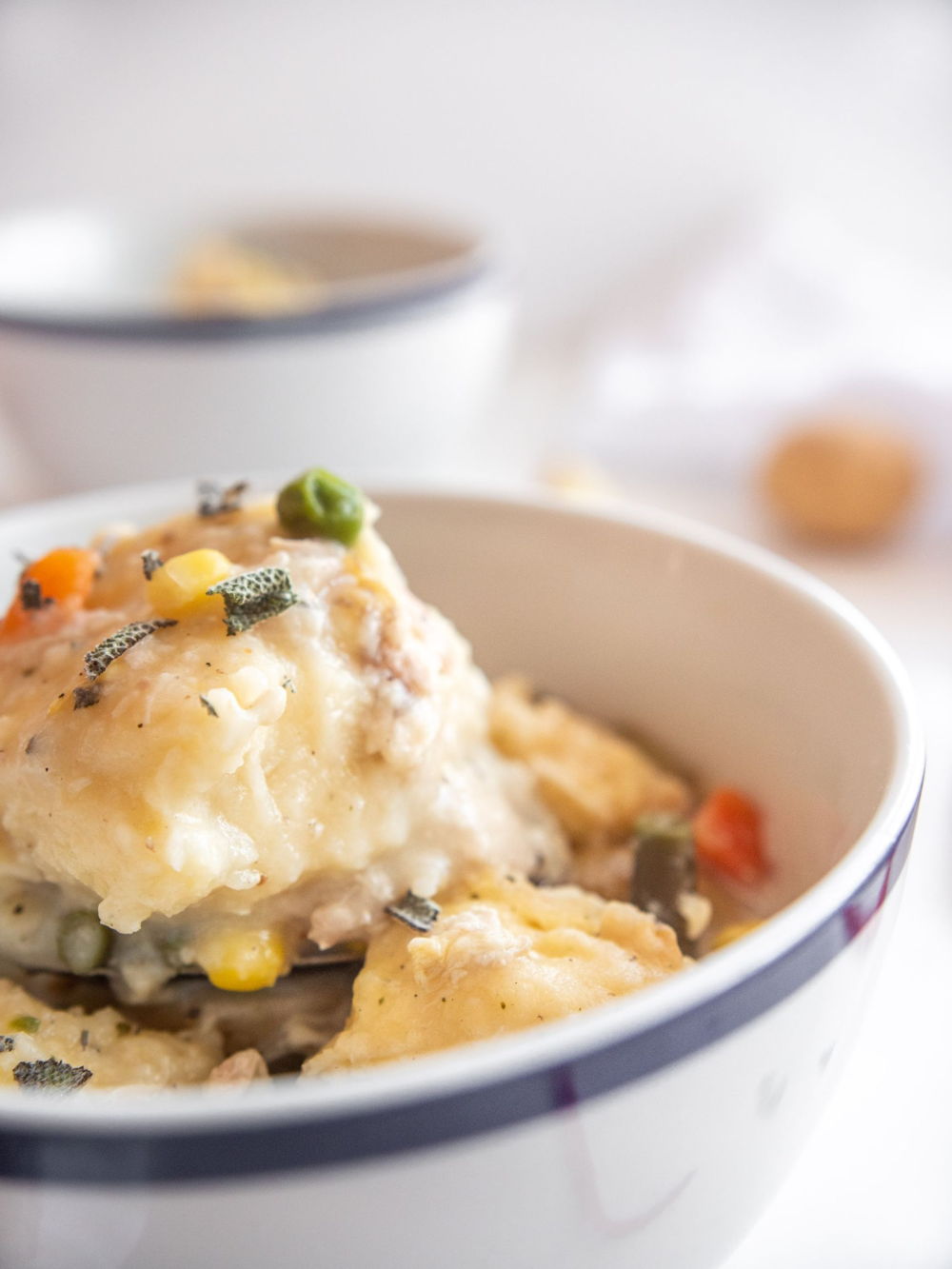 Hahnestly, it doesn’t get much better than this,