I can’t think of another food that, at its very mention, brings me so much joy, both at the prospect of eating waffles and at the associated memories of waffles in my life. Crispy or soggy, covered in syrup or stacked with fruit. Whip cream or butter. Chocolate chips or blueberries. Day, night, late night or very late night. At home or at The Waffle House. Yeasty or toaster-y, Belgian, Brussels, Liegre, Hong Kong, Krumkake or American, waffles, you’re alright in my book. This is my ode you, you geometrically perfected pancakes! 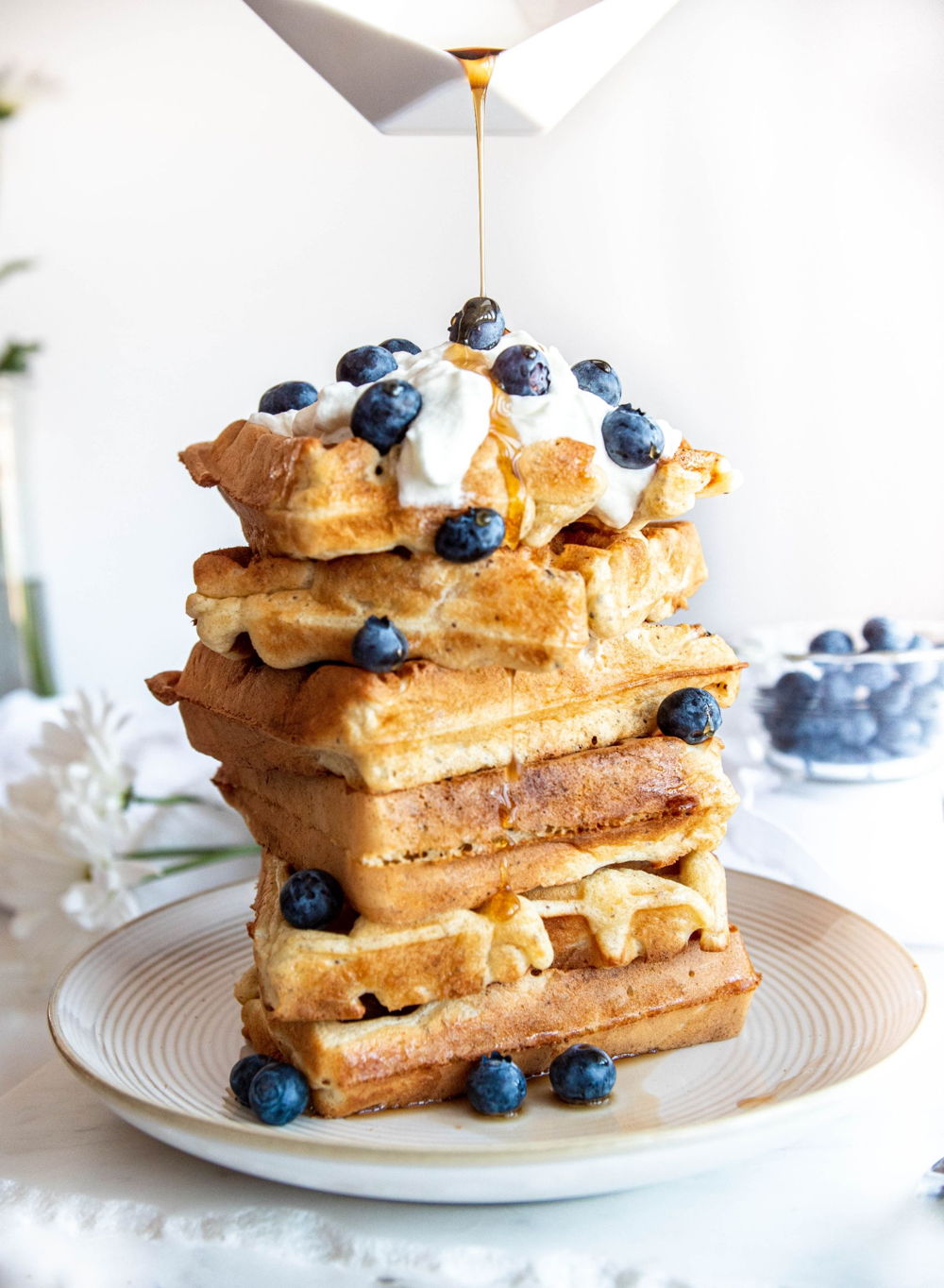 But before I knew waffles, first I knew pancakes. Pancakes in the Hahn house were glorious. Homemade Buttermilk Pancakes. No mix. Real buttermilk. Often with flavorful wheat flour. They were warm. Buttery. And (on my plate) slathered in delicious maple syrup. In those days our family made our own syrup. Sugar, boiling water and maple flavoring in a small copper bottom Revere Ware pot. We re-filled the same syrup container each time. A clear plastic bottle with a capped yellow squirt top. Something like an oversized diner ketchup or mustard bottle. This particular combination of pancakes and syrup were like my parents. I never knew a world without them. They were the comforting constant that was simply a given of existence. A fact of nature like breathing oxygen or the cycle of the sun and moon.

When you know something as one way from a young age when you first encounter it in a different form it can be a bit of a shock. The first time I had a syrup other than our home brew, I think I was about 4 years old, and was at my grandparents’ breakfast table. It was Mrs. Butterworth’s. Sure, I totally loved the idea of the grandmotherly shaped bottle/kindly meal companion. (We also didn’t have a TV in those years, so I hadn’t seen the commercials at that point either.) But when I took a big bite of pancake drowned in the viscous goo I was horrified. What was this vaguely maple-esque 10w-40 ruining my cakes? I was befuddled. Where was the thin, simple stuff I knew as syrup? I sat there not sure what to do. I didn’t want to be rude and ask if there was something wrong with the syrup. But as I pondered my next move, I noticed that everyone else present seemed to think it was how syrup was supposed to taste, so not wanting to be the odd kid out, I decided to say nothing. I’m not entirely sure, but I think I told our folks about this afterwards and they hipped me to the fact that everyone does things their own way. This was just a different way to do syrup and some people prefer that thicker, sweeter, almost chewable kind of breakfast sauce. I can still taste that bite of that alien syrup. A teachable breakfast moment. 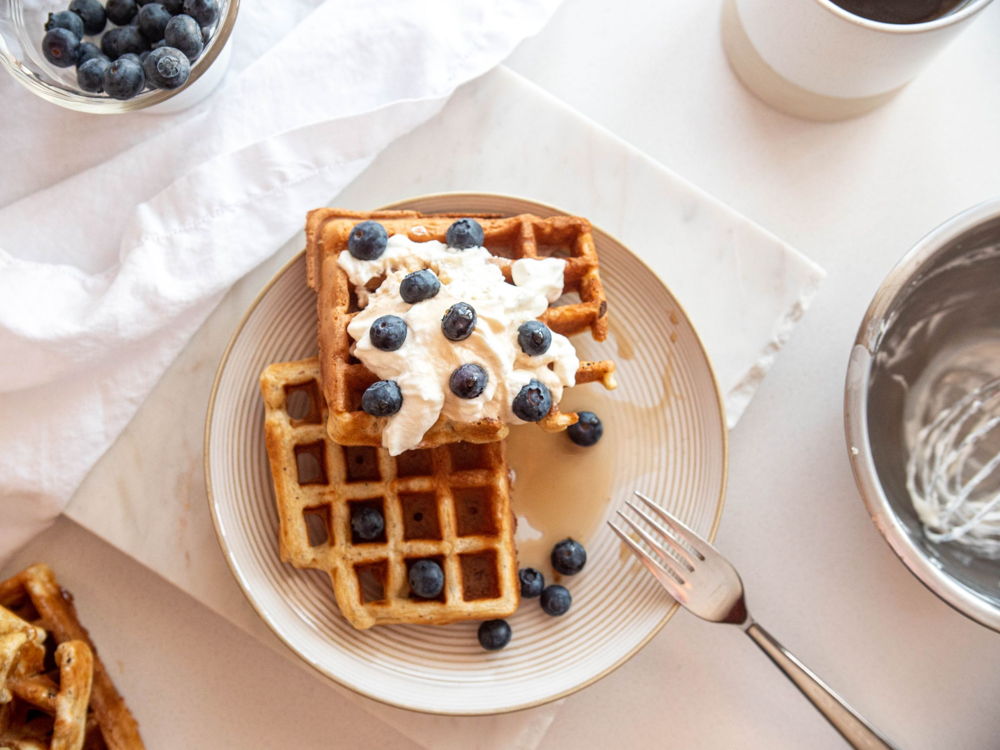 So if pancakes were my family, then waffles were my first love. Yeast waffles to be specific. They were a fantastical creation to my young mind. An engineering marvel. A pastry designed with self-contained wells for syrup and butter. As well as a crispy shell to slow the absorption of said liquids. An innovation that corrected a serious design flaw of their flatter, pancakey-er cousins. A completed saturated pancake is absolutely a wonder to consume, but if you can keep all the elements together, but not blended, now that’s the miracle of civilization at work. Pass my crumpet, please. 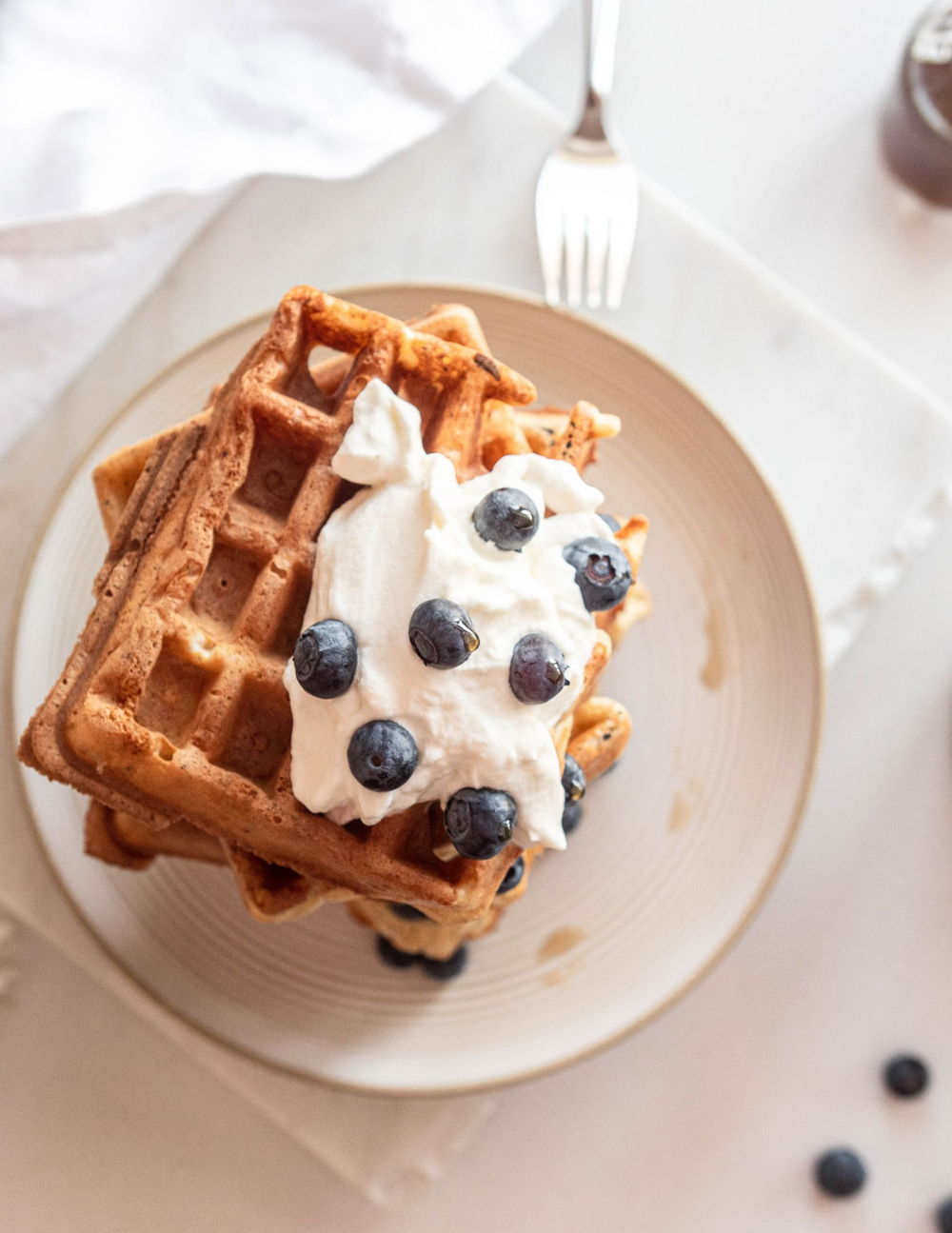 Also, our waffles had something that our pancakes did not. An ingredient out of a sorcerer’s bag. A living powder. Yeast. When I was told that yeast was alive I couldn’t believe it. My imagination went into overdrive. I saw little green people living inside the tan crumbs. Mind you, at this point in my life, I was convinced that there was a documentary element to things like the Care Bears movie. I was just waiting to stumble across a talking green bear with shamrocks on its belly. And I also knew you could walk on clouds, just for some reason no one was spreading the word. Probably because it was so awesome that they were trying to keep it a secret and not ruin it for the cool people. However, while I was waiting for the great Care Bear reveal, I made do with the magic of yeast, sugar and water foaming and growing on their own. And oh the smells. Incredible. There’s nothing like the scent of yeast drifting off a bowl of rising batter to say nothing of the delightfully sour aroma of the waffles once cooked. 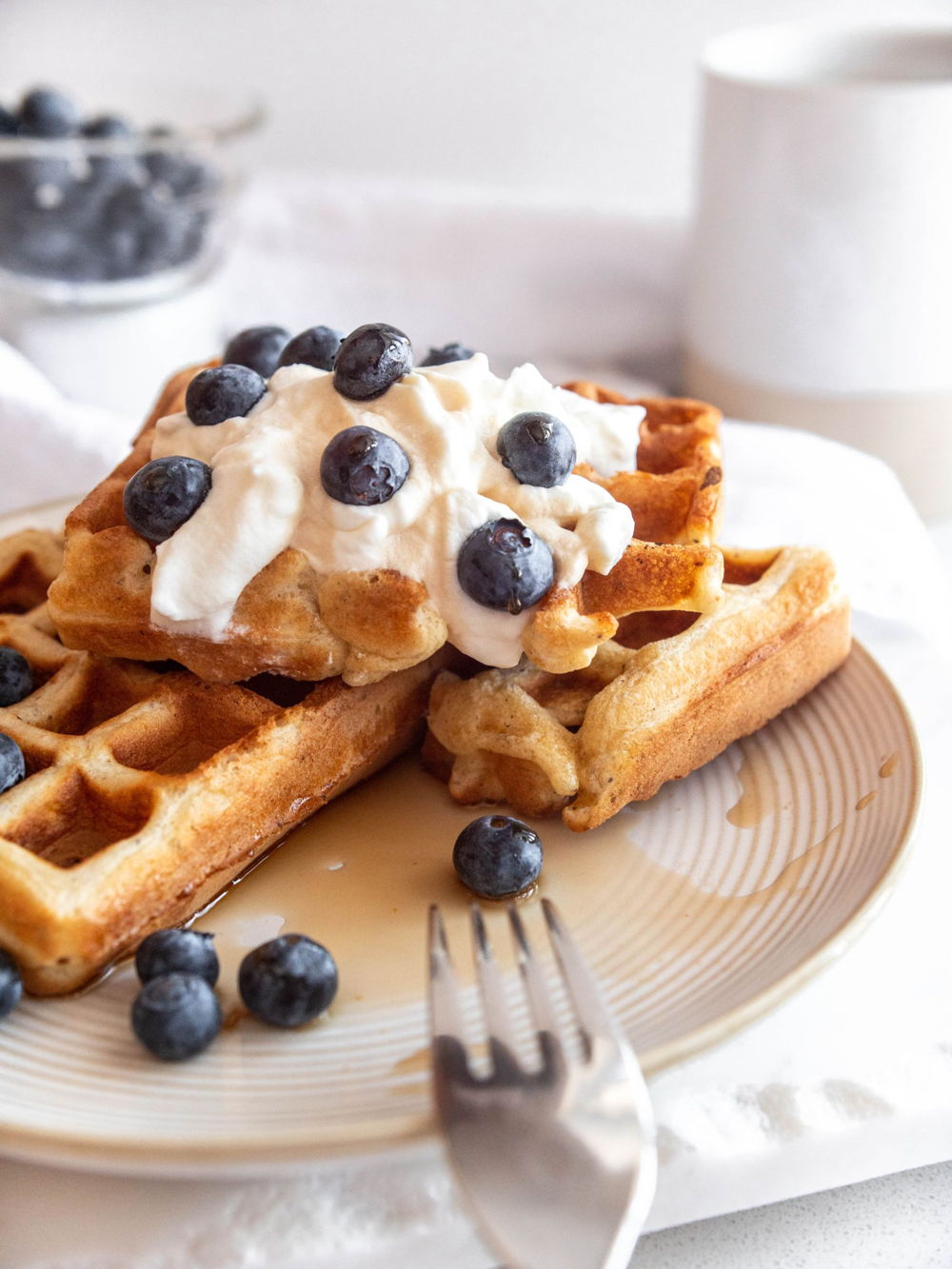 Not only were waffles amazing in design, flavor and smell, but they even required special, super cool equipment. Our family waffle iron was as mind-blowing to me as Doc Brown’s DeLorean in Back to the Future. And honestly, similar in appearance. A sight to behold all on its own. Real. Heavy duty. Not the cheap, break-in-a-year kind you could get at Kmart. This thing was the BMW of waffle irons. It was precisely machined, durable and high performance. Plus the griddles had been pre-seasoned. I believe it had been a thrift store purchase so the cooking surfaces was dark and spotted in black and brown from years of previous use. It was like being given an heirloom, but a functional one. I loved pulling it out of the cabinet where it lived. Not high a high shelf. Right down at adult knee height. Or for me at that age, waist height. The cabinets in the Markham house had not yet been renovated by our dad and still were painted in 1950’s avocado green. Having no sense of this colors’ place in history, and its extreme overuse, as a kid, I loved it! So much cooler than boring old brown.

Now I’m old enough to know not take all my memories as truth. I realize this next bit may be inaccurate, or a combination of other memories, but I’m also old enough to know that a good story is often better than some lifeless facts. With all the recollections I have about waffles and their associate accoutrements in our home, there’s a tiny detail that always comes to mind when I think back. On the chrome side of our families’ waffle iron there was the faded, handwritten thrift store sales price in black sharpie. To me it made the waffle maker extra special. I loved that price. I never tried to clean it off. It was like a maker’s mark or some sort of certification that this device had been tested by time and a former owner and was still holding up. Persevering. Even thriving. One person’s discards are another’s warranty. “Takes a licking and keeps on ticking” in action. In a world of many incomparable things, there’s still nothing quite like a good thrift store find. It was a device imbued the character gained over time. A mechanical beast that it survived its years of heavy usage though someone, then us, caring for it. Because it was a special piece of equipment and because, well, it made the best thing ever, waffles. And, for me, care plus character equals joy. Like I said, everything waffley is all about joy. It’s hard to even say the word waffles and not smile. 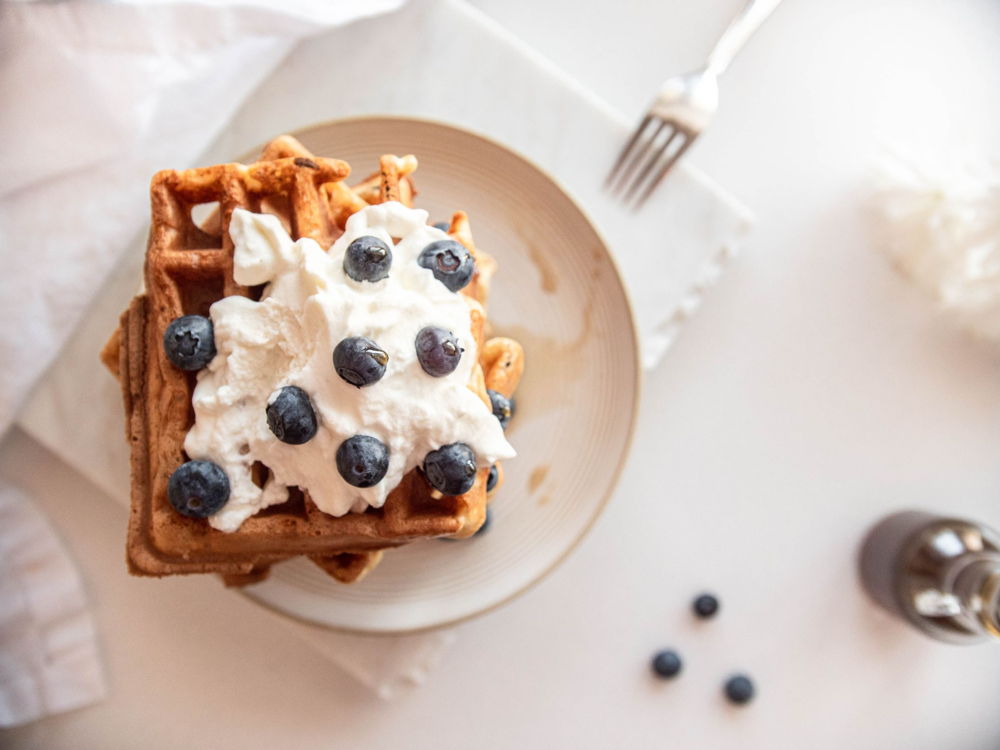 Now if you’ve made it through all this reminiscing, you’ve more than earned this next part. The recipe for these miraculous creations:

Combine the flour, sugar, salt and yeast in a large bowl until well mixed.

Then, in pan on the stove, or in the microwave, heat the milk and butter until very warm. But not too warm, you don’t want to kill the yeast with scalding butter. So once they’re moderately heated, and the butter is fully melted, add the warm liquid and the eggs to the flour mixture.

Beat everything together until you have a smooth batter. Cover the bowl with plastic wrap, cheesecloth or towel and let stand at room temperature for at least an hour or two. The mix will start to bubble and smell delightful. Or you can refrigerate overnight, or for up to 4 days, adding 2 additional tablespoons of sugar after the second day.

When you’re ready to cook, preheat your waffle iron, spray with cooking spray and add 2/3 to 3/4 of a cup of batter (could be more or less batter depending on the size of your iron and recommendations of manufacturer). Close the lid of the waffle maker and cook for 3-6 minutes, again depending on the size of your device and amount of batter. Keep an eye on it, you’ll be able to tell when it’s ready. You’ll see a slight golden brown creeping onto the edges of the waffle poking out of the sides of the iron.

Once they’re ready, top your waffles with butter, syrup and/or whip cream and/or berries (or bananas… a personal favorite of mine, their sweetness goes extremely well with the sourness of the yeast) and enJOY!