I recently wondered which recipe I’ve used most often from our family cookbook, and I determined it’s a super close race between this Vegetable Chili on page 20 and the Traveler’s Stew recipe on page 21. That’s right; they’re back to back. Coincidence? No, it is the ‘Soup’ section after all. But this data does clearly prove my affinity for warm and stewy vegetarian dishes. 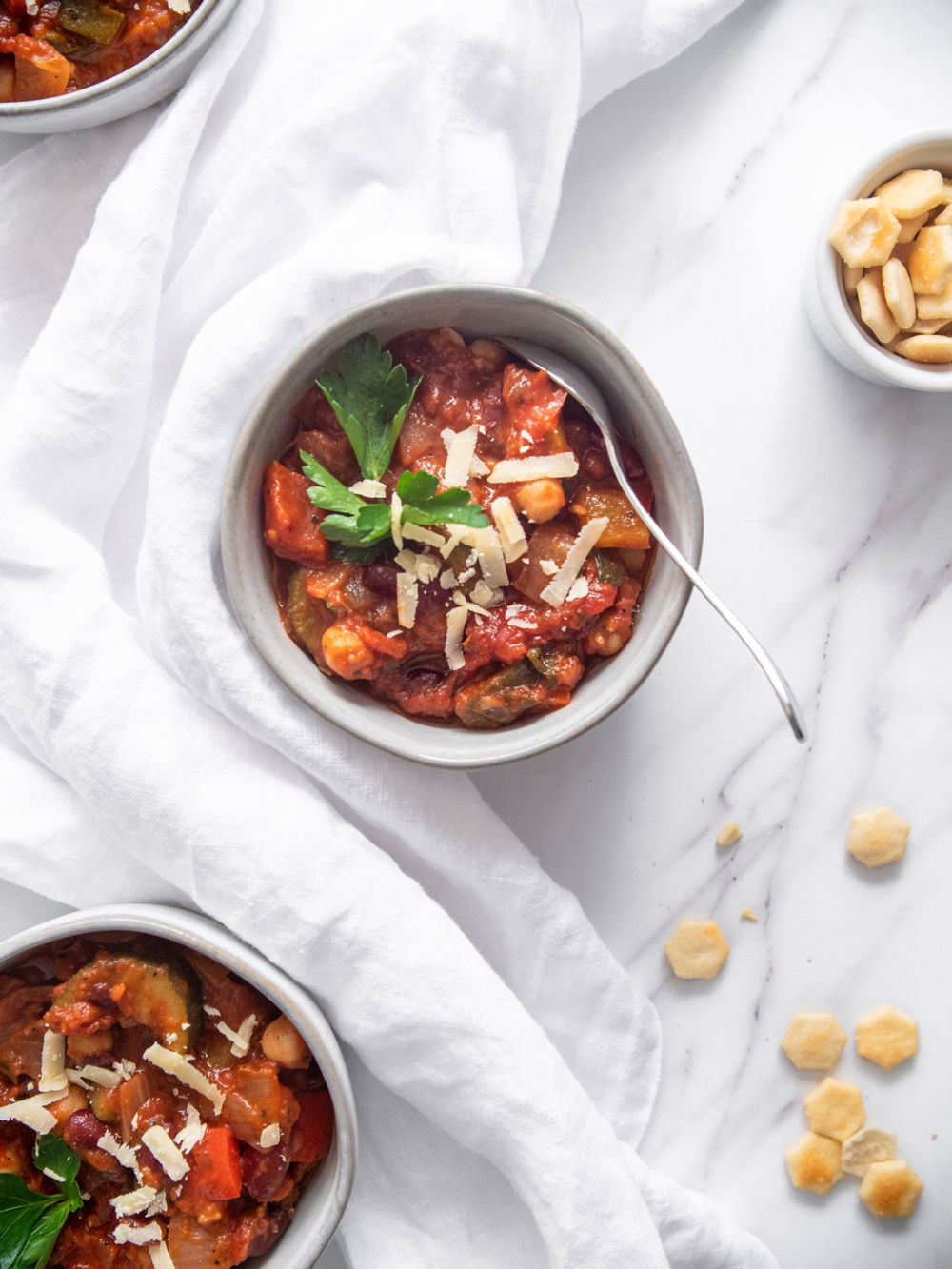 I often end up snapping a quick picture of the recipes before I head to the grocery so there’s a chance that Google Photos could settle this dispute based on how many random photos of each recipe I have stored in the cloud, but where’s the fun in that? I’d rather focus on making a batch of veggie chili instead!

Because once you make a batch of chili, you get to EAT a batch of chili. Hopefully not all in one sitting, but completely understandable if you tried. Especially if you also whipped up a batch of homemade cornbread, because those two combined might be my most favorite meal to ever consume on this planet we call earth. 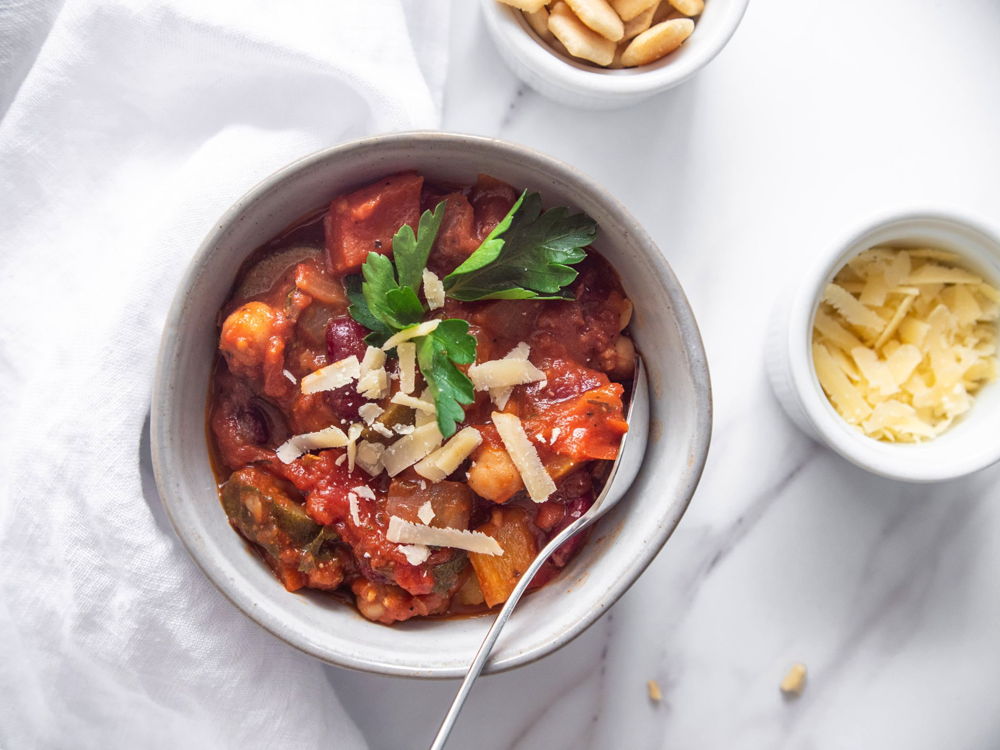 I know we’ve thrown around the word ‘favorite’ a lot here on this blog thus far, but just last spring a friend asked me what my favorite meal was and I unequivocally responded, “chili and cornbread.” So that’s got to count for something.

And while we haven’t done our post on the cornbread recipe yet, I’m willing to publicly promise that it will be completed in the relatively near future and that it’ll be worth the wait. Hahnestly, a little Jiffy mix will do in a pinch, but the real deal recipe doesn’t have many additional steps beyond a mix and will yield you a tangible slice of heaven, appropriately golden in form. It’s tender and delicate, but with enough structure to transport your topping of choice (#butterisbest) from the plate to the mouth. Its flavor isn’t overpowering, but is well rounded and finishes with a hint of earthy sweetness that can only be described as pure comfort.

Whoa there Nelly, I just realized I need to pump the brakes or I won’t have anything left for the actual cornbread post! Delicious bread products are so darn distracting. But since you can’t really make a whole meal out of cornbread alone (I’ve tried), let’s call it what it is: cornbread is the world’s best sidekick to today’s hero, Vegetable Chili. Neither dish usually wears capes (although that would have made for an interesting photo shoot) but on the off chance that Chili & Cornbread become the newest members of the Marvel family, I think it’s time to dig into this veggie chili’s origin story. 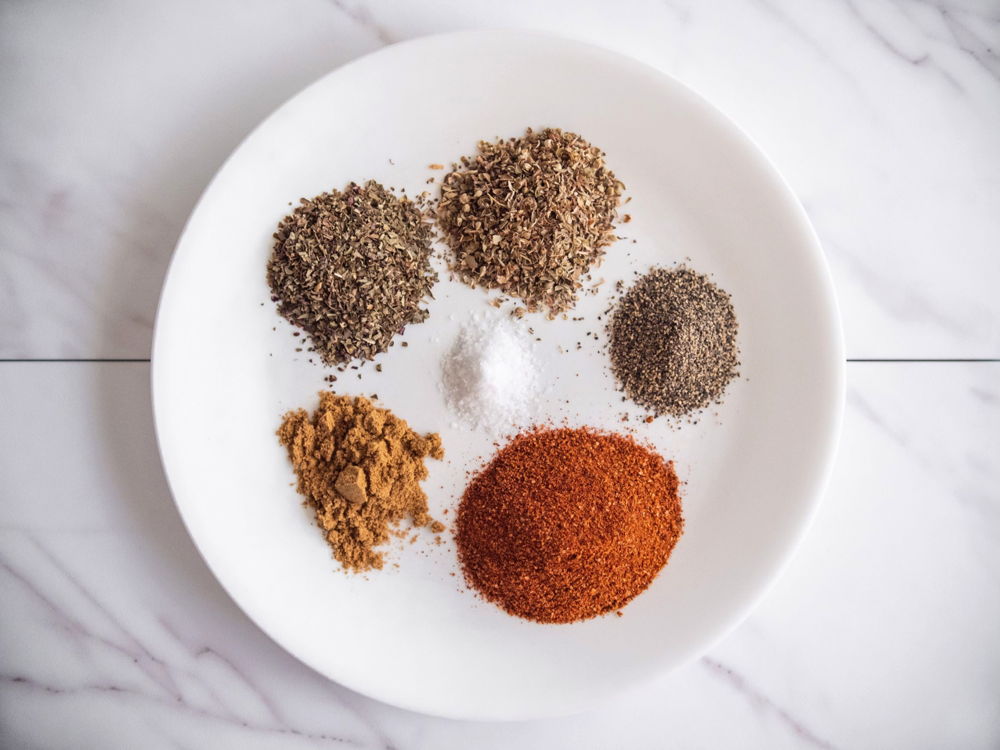 If my memory serves me correctly, and much like the Asian Chicken Salad, this recipe entered our lives in the mid 90s - or what kids are now calling the late 1900s. Regardless, I’m 90% confident that we found it in the black and white print of an actual newspaper. I haven’t been able to find any proof of which paper, or the exact date from my searches on the interwebs, but I did find plenty of other vegetarian chili recipes. And while many sounded delicious, I did not come across any with zucchini, or fresh *dill. So while we don’t know the specifics on what brought this recipe into the world, we can still further explore what the recipe meant to us Hahns.

*I feel compelled to mention that due to having an anti-dill-ist in my midst, I stopped adding dill over the past few years. But back in the day I thought its flavor worked perfectly with the tomato sauce all the other veggies. 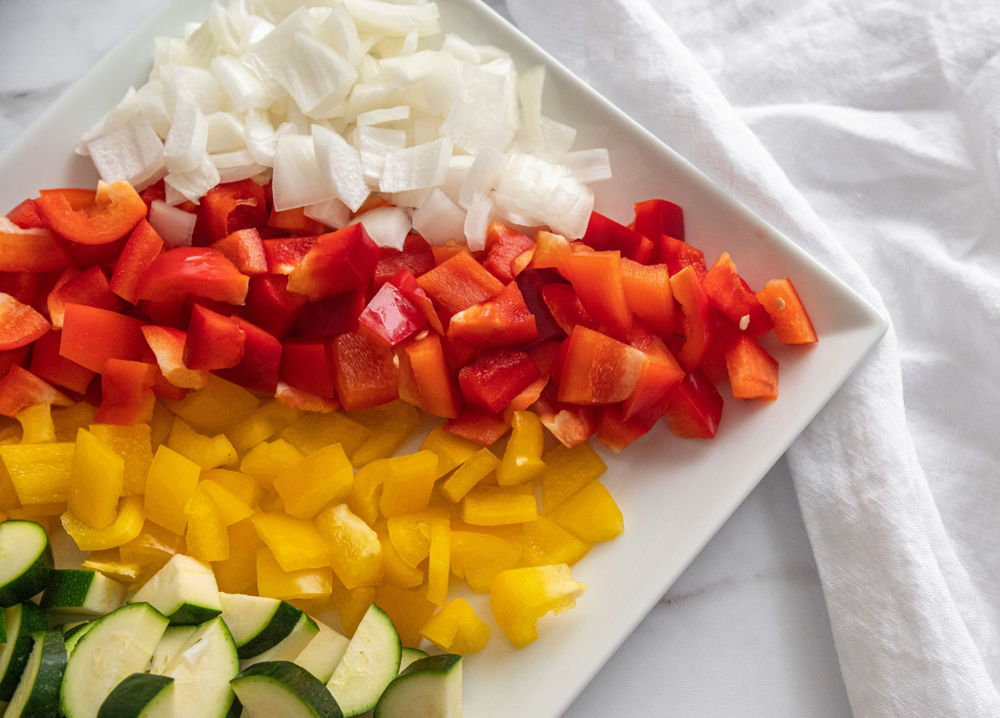 Speaking of veggies, one of the first things the recipe meant to us was that we’d be eating more of them! I bet some of you might be wondering, “Why vegetarian?” or even, “Where’s The Beef?” To the later question, I say kudos to you for referencing a Wendy’s marketing campaign from 1984! Or maybe the kudos should be to the ad agency behind this nearly 40-year-old slogan, because now I’m craving a Wendy’s hamburger, but I digress. While this recipe IS vegetarian, it is nothing if not versatile and can easily be adapted for carnivores because it’ll still turn out great if you add ½ lb of ground beef. But may I suggest giving it a spin without the beef first? Because with this combination of legumes and veggies, you won’t even miss the meat!

If I’m being 100% Hahnest here, there have been times that I’ve felt nervous to serve a vegetarian chili to new friends. Most chili recipes are bonafide beef bonanzas, so most people don’t expect to see anything green in their bowl when they’re promised a hearty meal of chili. But, per usual, those nerves have been futile and this vegetable chili has always been a smashing success. At times even REQUESTED by aforementioned carnivorous colleagues. If that’s not enough of a ringing endorsement then maybe I should consider hiring Wendy’s ad agency circa 1984.

When I checked in with my bros, Andy + Jeremiah, to investigate what the recipe meant to their kids selves, Jers remembered how easily adaptable the recipe could be. You could interchange veggies or whatever you had on hand and it would still be excellent. In fact, it was the first time he directly realized you could improv on a recipe. Yet another data point in the theory that baking is a science, and cooking is an art form!

But maybe this also speaks to what drew us towards this new version of chili in the first place, and hopefully also answers the “Why Vegetarian” question. Compared to its meaty predecessor, veggie chili offered VERSATILITY and VARIETY, folks.

While finding the veggie chili recipe in the mid 90s does feel like a gillion years ago, it was actually fairly late in the range of our childhood years so we’d already eaten plenty of traditional chili by that time. 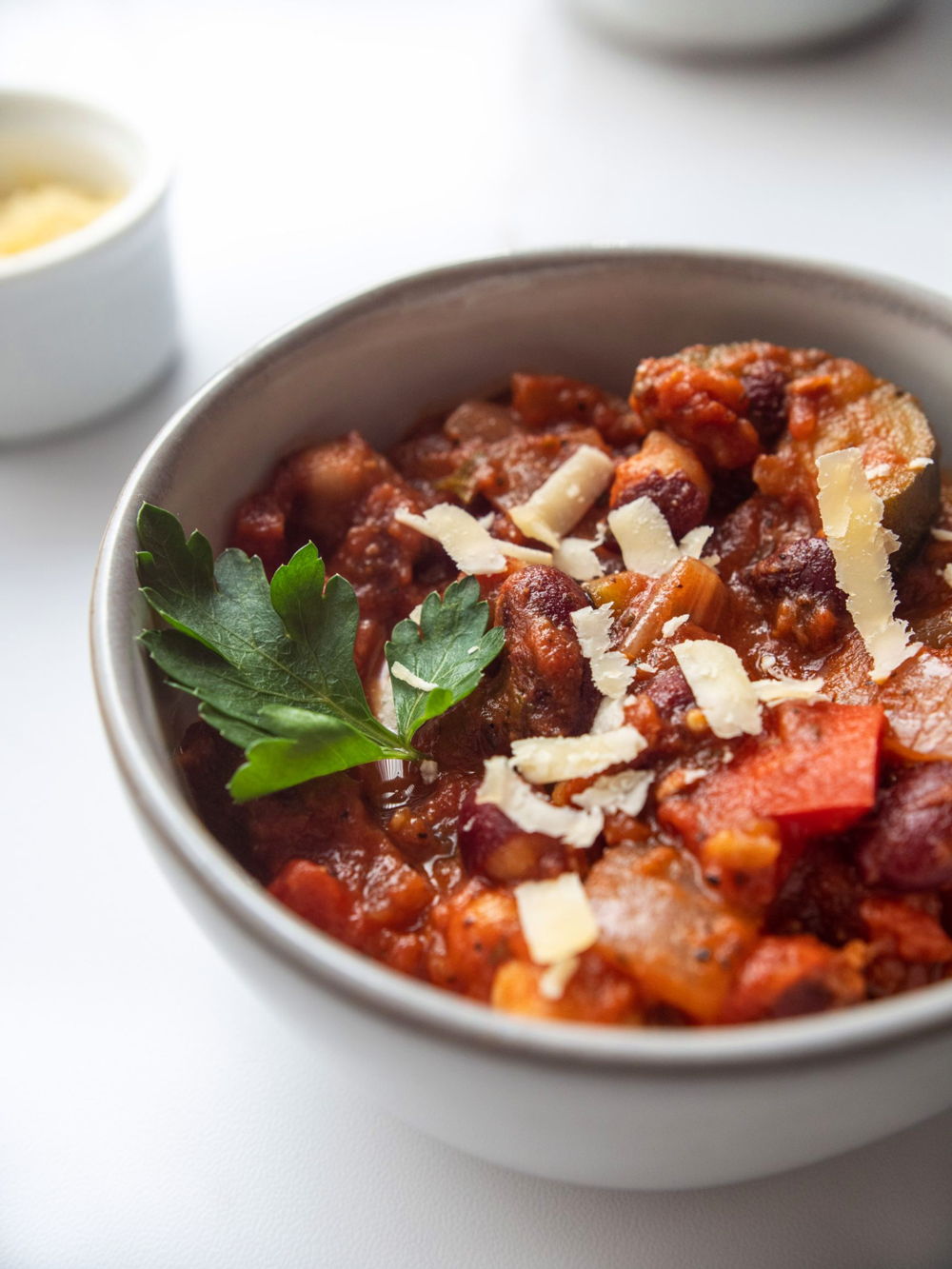 I actually have an early memory with that traditional version of chili from my knee high days. Sure, ok, let's say it was the first time I EVER ate chili. The family was attending a concert and my mom had somehow packed a big container of chili for us to eat during the show. Which makes me think it was an outdoor concert. But plot twist: it rained. Or at least that's my best guess. Because the part I remember most was eating chili out of paper cup in a parking lot, shielded from the rain by the hatchback of our yellow Ford Fiesta. My first bite was a little too hot (shout out to mom for figuring out how to keep the chili warm!), and I was intimidated by all the new flavors in this dark concoction, but man was I excited about those oyster crackers. Crackers! For dinner!! Keep those coming, please. And while I munched away on my half chili / half cracker meal, I noticed a hint of stress since my parents had to scramble for a backup plan to feed their hooligans. You know, in the rain, in a parking lot, as quickly as possible before the show started. All factors that changed at the last minute. Thanks for the hustle, Parents! I can't say for sure who was performing that night, but I do remember it being a male artist with an acoustic guitar. Not positive, but going to cast my vote that it was Tom Paxton. I wonder if Tom likes traditional or veggie chili? 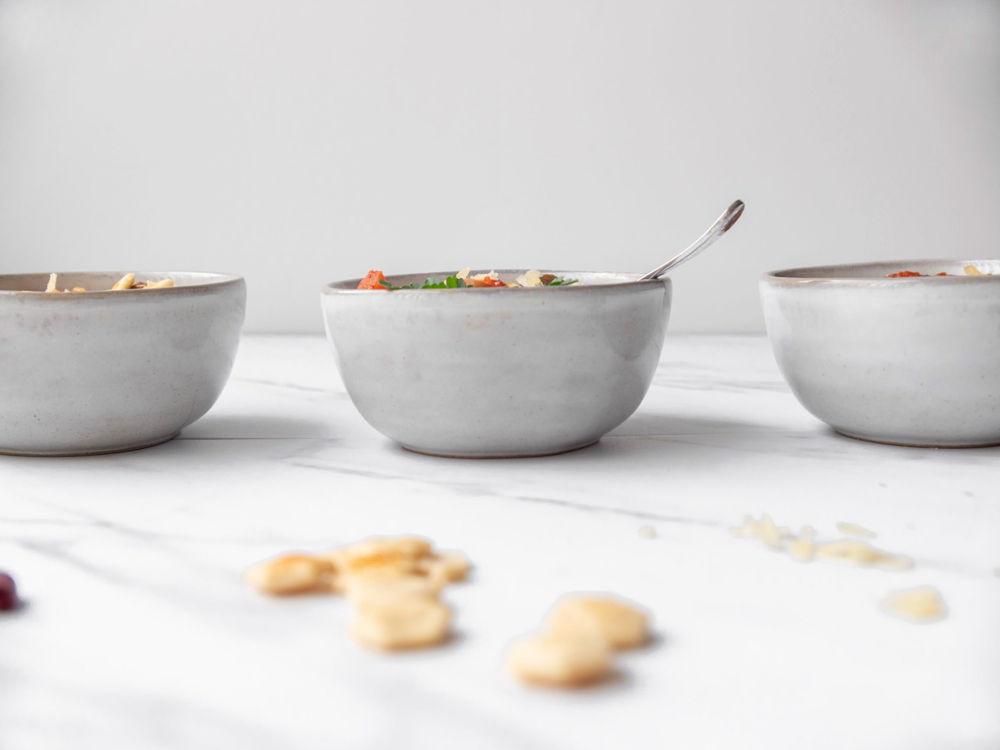 And by traditional I mean ground beef, beans, tomatoes and chili powder. The Ultimate and Iconic Chili; it is hearty, unique, and memorable, but also rather limited. Our later take on chili incorporated tons more ingredients and flavors, yet it still didn’t miss the mark and turn itself into a ragout or ratatouille in the process. It opened the door to creativity. It also opened door to your fridge to help give random or forgotten veggies the home they’d always wanted: in your chili pot!

I don’t know about you but I’m feeling jazzed to share this recipe now!

Too many peas for the quiche with cheese? The bee’s knees!

Is there already a Dr. Seuss of the food blog world? Asking for a friend ☺ 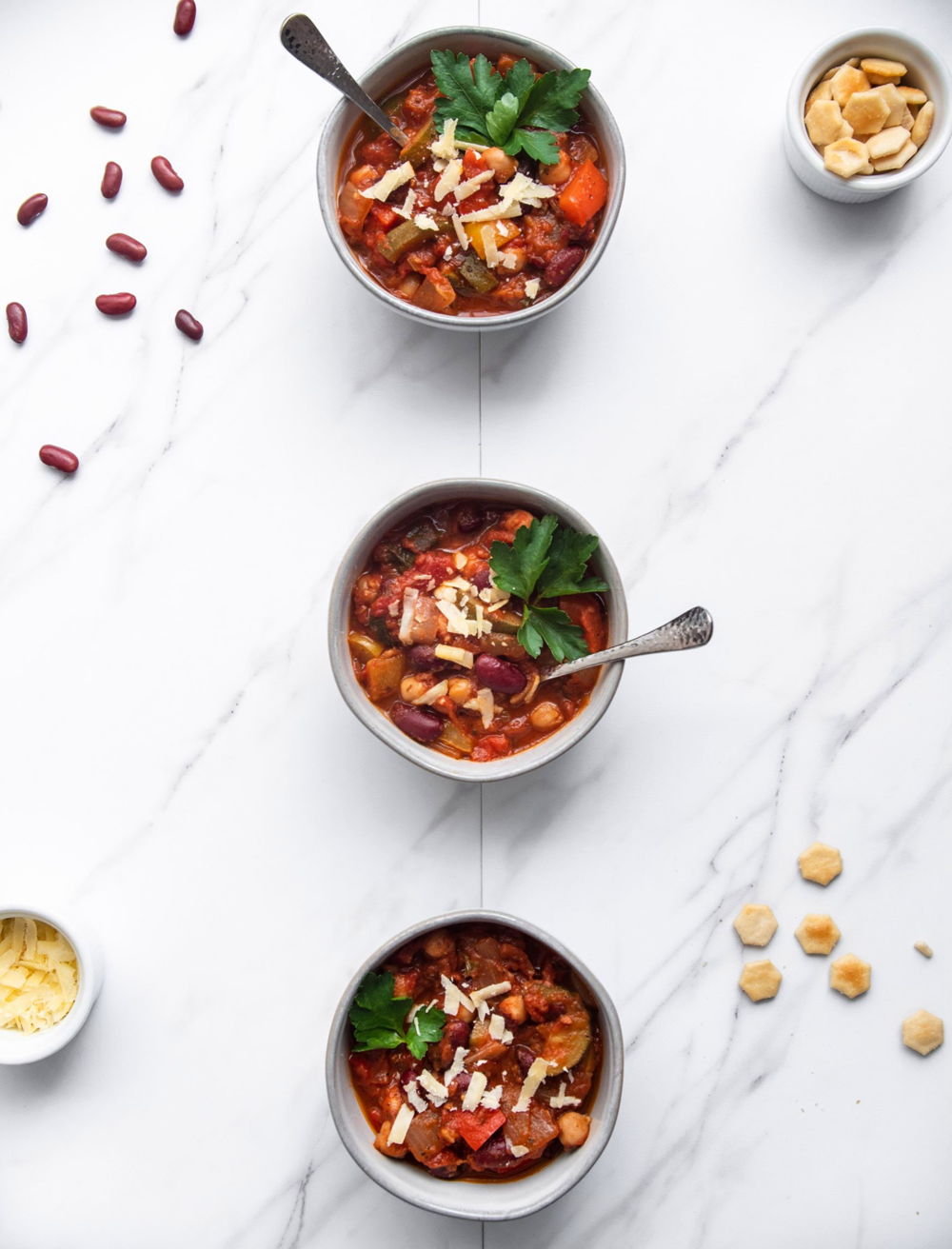 In summary, the variety of ingredients in this vegetarian recipe helped to expand our palates as well as our minds. We saw that it’s ok to get creative in the kitchen because the best recipes are also adaptable. And because our Hahn household was nothing if not frugal, it sure didn’t hurt that veggies were (and still are) cheaper than beef! At least cheaper than regular ground beef; the jury is still out on the price comparison for other parts of the cow. But our mom’s dabbling into mystery BBQ will be a story for another time!

“Mom, why is the BBQ on my sandwich kinda purple?”

Why INDEED. Any guesses? I’ll make things interesting and say that the first correct answer wins access to our Vegetarian Chili recipe!

Scratch that. Because, much like my friend once overhead Arnold Schwarzenegger say to his kids after completing a challenging hike in Malibu:

“We are ALL winners here today!”

Whew, apparently I had a lot to say about chili. I think that's the final proof it really is my favorite meal. I hope you like it too!